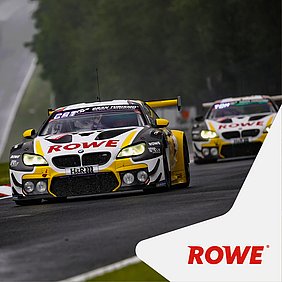 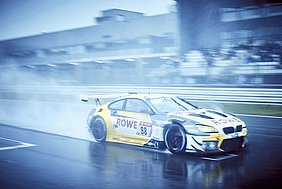 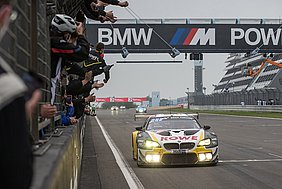 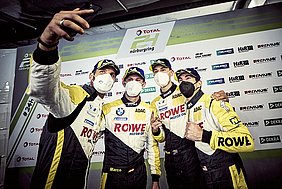 With fantastic team performance, ROWE RACING finished on the podium for the second time in a row at the legendary ADAC 24 Hours ‑ at the Nürburgring. At the 49th ‘Eifel Marathon’, which turned into the ‘Eifel Sprint’ when the foggy conditions forced a 14 1/2-hour interruption, the team from St. Ingbert took second place this time after last year's triumph, and the first pole position by "Rainman" Nick Yelloly from Great Britain in the #1 BMW M6 GT3. At the end of the race, the BMW M6 GT3 in #98, the two German former DTM champions Marco Wittmann and Martin Tomczyk, their BMW works driver colleagues Connor De Phillippi from the USA and the South African Sheldon van der Linde, who will also represent the ROWE RACING colours in the DTM this season, were just 8.8 seconds from victory.

The ADAC 24 Hours 2021 may have been the shortest in its 51-year history, but this did nothing to phase the endurance experts from ROWE RACING. The 6-hour ‘gallop’ to the red flag on Saturday evening at 9.29 pm was followed by a 3 1/2-hour sprint from 12.00 pm on Sunday lunchtime. Only 59 laps and 1,497.302 kilometres were completed in total, the lowest number ever.

Martin Tomczyk stood out from the pack in the first part of the race, catapulting the #98 from 25th on the grid to fourth in just six laps, and managed to stay among the leaders even during the first torrential downpours. After the first change of driver to Connor De Phillippi, the #98 even alternated several times at the front with the #1 sister car, now driven by BMW works driver John Edwards from the USA who had replaced starting driver Nick Catsburg. After starting from position one, the Dutchman had also led the field onto the Nordschleife in first place. But the fog thickened as the evening wore on, which ultimately forced the race to be halted, only to resume at midday on Sunday. Austrian Philipp Eng maintained the lead for five laps after the restart before his first pit stop saw him drop back to 19th place in the field that was again tightly packed, and shortly afterwards he was forced to leave last year's winning car in the pits due to a technical fault. Meanwhile, Sheldon van der Linde engaged in a thrilling duel with the #911 Porsche for the entire duration of the race, which was only decided in favour of the ‘Grello’ with four laps to go after the final pit stop. Although Sheldon van der Linde battled it out until the last metre, in the end he was 8.8 seconds short of victory - the second closest gap in the history of the ADAC 24‑ Hours.

Dr. Alexandra Kohlmann, CEO ROWE Mineralölwerk GmbH: "My full respect to the team and the drivers, because of course as last year's winner all eyes are on you. We certainly experienced a rollercoaster of emotions. The fact that we can stand on the podium again at the end of the race is evidence of the extraordinary performance that ROWE RACING has maintained over the years.”

Michael Zehe,CEO ROWE Mineralölwerk GmbH:  “To finish first or second in the fourth 24 Hours race in a row is absolutely brilliant. We may even have managed to defend the title if the race had gone the full distance. Ultimately, we were only seconds short of victory, but what a fantastic performance overall!”

Hans-Peter Naundorf, ROWE RACING team boss: “The pole position on Friday evening after an outstanding driver performance in the #1 was another highlight in the history of ROWE RACING. The feat of being able to finish on the podium with the #98 after an extraordinary fight to catch up makes me incredibly proud of the entire team.”