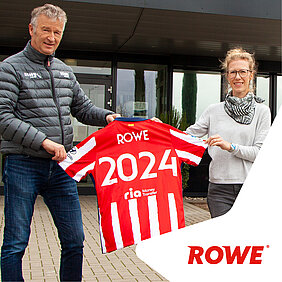 The more attentive football fans may have already seen it: another leading European club has been displaying the ROWE logo since 12 September. This time not in the Bundesliga, but rather on an international stage: the Spanish "LaLiga" at Club Atlético de Madrid. The ten-time Spanish champion plays in the highest Spanish division, the Primera División, and is famous well beyond its homeland for passionate play and fierce competitive spirit.

At the start of the 2020/21 season ROWE became an official partner and sponsor of Atlético Madrid and now has a strong presence in international football. For the time being, the contract with the team from the Spanish capital will run until 2024.

"We are pleased to announce another sponsorship in world-class football, especially in these times," says Michael Zehe, founder and managing director of ROWE MINERALÖLWERK GMBH. "The LaLiga is one of the most successful football leagues in the world, alongside the Bundesliga and the English Premier League. For this reason we are delighted to have a stronger presence in the Spanish and international markets thanks to this partnership, allowing us to further expand the ROWE brand there as well".

ROWE has been a sponsor of several German football clubs since 2017, in particular, the two first division clubs 1. FSV Mainz 05 as well as the top-tier club Borussia Dortmund are part of the football portfolio of the fast-growing lubricant manufacturer, along with the well-established clubs SV Darmstadt 98 and FC St. Pauli from the second division. The reasons for these partnerships are always increase of brand awareness, promoting the company logo and values and supporting sales in individual regions and markets.

"Each of our sponsorships is a deliberate and a strategic decision", says Dr. Alexandra Kohlmann, managing director and future owner of ROWE MINERALÖLWERK GMBH. "It is important for us to continuously expand the ROWE brand and to maintain a presence on key markets through various channels. Football is an extremely powerful and far-reaching medium in this respect, and to a large degree it overlaps with our core target group. The fact that we have now decided to enter into a partnership with a club in the Spanish league, with the negotiations having started even before the current corona pandemic, is largely thanks to the shared core values and international appeal that connect the Spanish club with ROWE".